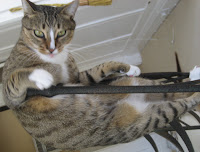 Politicatically correct - that's me the mighty meowster, and with an election coming up,I'm just hanging out trying to understand the electoracat system - CATegorically speaking, it's not the cat's meow for anyone to unravel! Furget chads and let's think shred shred shred - umm a kitty delight on an election night. 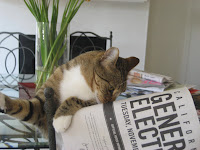 Furstly, I want you to understand my fur gets unfurled in the wrong direction when someone PURRsumes I'm a Democat, Republicat or even an Independacat - I'm just Guido the Italian Kitty and meowvalously PURRoud of it. But my paws are attempting to figure out the  giganticat CaliFURnia ballot. Whew, I need a catnap after this!
But categorically speaking, it wise to look at all the proPURRsitions from every angle before you  make your decision.... see, this is how my smitten kitten self does it. 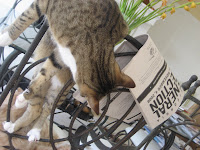 So don't let your ballot get the best of you - tackle it!   Catzowey - it's most important to get your paws to  vote - even an Italian Kitty believes in exPURRessing the  right to vote... you won't be able to treat yourself to catnip  if you don't vote.
Vote Absen-takitty - but just vote!

Mirror Mirror On My Wall

Who's the fairest Meowster of them all? Well let's not have a hiss fit over that! Hey I'm Guido the Italian Kitty and my catitude is flowing this week because my feline fairy god mother is vaCATacationing ( I think in PURRto Vallarta)  so while she's lounging in South of the Border abundacat sun rays I'm  on my own and purring about it.
Hey, it's not suPURRfluous that I want to keep my smitten kitten Italian whiskers  in balance - you should groom in your room too. My magical meowster mirror mirror on the wall seems to suffice well and all 4 of my adorakitty paws are not PURRpondering over "who's the fairest Meowster of them all"!  I know who is ... do you??? Now go and have a nonCATastrophic day and sneak in a catzowey catnap too!
Ciao & Meow,
GUIDO - The Italian Kitty
at September 22, 2008 1 comment: 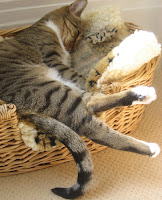 Catzowey! The news is not aMEWsing these days so I'm optiCATing to slumber away until the fat cats at the Federal Feline Reserve get our economy back on track - we all need it pawsatively and expediacatly too.

I don't know about yours, but my MasterCATcard has interest rates higher than a catnip tree in Catalonia - now that's CATastrophic, and it's causing me to FURtail my spending - in fact it's knocked me out. 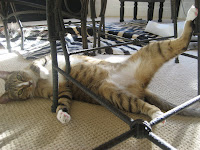 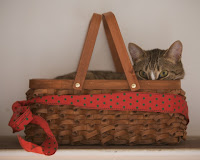 A tisket a tasket, I'm headed to my basket, cuz my mighty meowster whiskers are not wiggling at the rising cost of imPURRted Italian sardines, a meowvalous staple in my dediCATed delicioso diet. Wishing you a week full of fantasticatnaps and cross your paws that we're back on track and having a doggone great time soon! (oops, I meant Catzowey time! )

Fishin' With A Mission

The cat's got my tongue and I still can't feline fess up about why I'm catting around in luxurious LA - land of my-oh-my stars on the street and in the sky. Abundacat FURiends have plied me with vintage  catnip and PURRomises of boat loads of salmon tartare and  fun feline deliCATisies, but alas, I'm not letting the cat out of the bag.
So what's an Italian kitty to do?  I go fishin'!

Ya gotta calm your whiskers for just a little while longer - (didn't some fat cat say "curiosity killed the cat"?)  I've got 9 lucky lives and plan on wiggling my whiskers thru all of them. Just kick back  and relax your paws  with a nonCATastrophic catnap to purr away the day. And,  go fishing! Being the envirokitty I am, I only do CATch and release.
Ciao & Meow,
GUIDO - The Italian Kitty
at September 08, 2008 No comments: 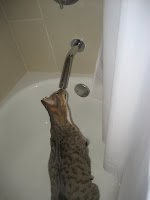 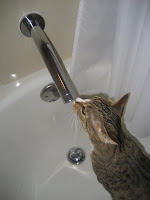 This envirokitty is a demandacat for water saving and being I'm Italian, well it's no well kept secret that I'm into fine feline design too - Leonardo Da Kitty and  MyCatAngelo make my whiskers wiggle with their fantastikitty designs. When my paws were out and about last week  I came across this faucet in a lion sized tub - so decided to shake paws then meet and greet it, cuz I'm a FURiendly feline,  but I'm PURRpondering where the water is: Hello ... is anybody in there?  Hi there, hey, it's me Guido the Italian Kitty. Come on out! 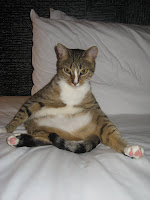 My four VIP "Very Important Paws" got exhaustiCATed with this cat and mouse game the faucet insisted on playing with me, so I dived onto my divine feline down bed to cruise into a snooze in the fashion I'm accustomed to - after all, my paws have just returned from a week in Hollywood (nope didn't spot Snoop Dog or CATherine Zeta Jones) - and you're miracuCATulously  curious as a cat wondering why this smitten kitten flew South to La La land (the sun rays get my Guido 4 Paws UP award!).  Fur now, my mighty meowster lips are zipped but you'll find out before you know it will be an awesome pawsome moment.
Ciao & Meow,
GUIDO - The Italian Kitty

Holy Cannoli I'm Not Monkeying Around These Days

Catzowey! Me and myself are not monkeying around  these days with the quarantine. But we sure are happy to meet this masked monkey dude .. a... 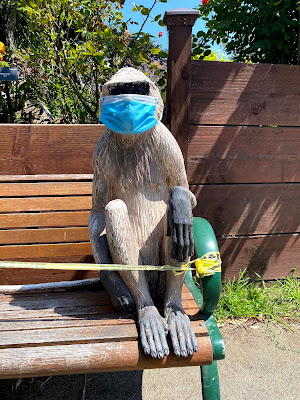